I have been learning Esperanto lately (see here). One of the really cool features of the language is affixes. Basically, you can create new words using some simple morphological rules, e.g.:

There are a lot of affixes (at time of writing I have 48 suffixes and 18 prefixes), so I thought it might be useful to write a small program to create new words by randomly attaching these affixes, then quizzing myself on them.

n_p is the number of prefixes, n_s suffixes. The cheat flag toggles printing the explanation.

This is obviously a ridiculous word which no normal person would use, but I find generating and interpreting these very entertaining. Another example...

I could go on all day. To save myself the effort of doing this, I automated it. So now there's a...

Every hour (or so), it tweets a random root (grabbed from a dictionary) with a random number of suffixes and prefixes. Code is in the same repo as before, see vortidplenigilo.py. It chooses how many affixes to use based on two draws from Poisson distributions, preferring fewer prefixes. Since it's limited by Twitter's 140 character limit, those with n_s or n_p above 1 tend not to make it, unfortunately. Future work will shorten the descriptions so I can squeeze more in. The selection of which affix is not entirely random, however...

Not every affix can go on every type of word. Some take nouns and output nouns, other take nouns and output adjectives, etc. The page I grabbed the affixes from thankfully lists which transformations are valid, so I encoded that. See affixes.py for what is essentially a rendering of aforementioned page into python. The sort of information I recorded is explicit in this class definition:

arbarero: one of a collection of trees... a tree
dormigiĝi: to become made to be asleep... to sleep

I'm not entirely convinced I want this, though. For example,

sort of makes sense. Jury is out on this decision.

One of its first tweets was beautifully meta: 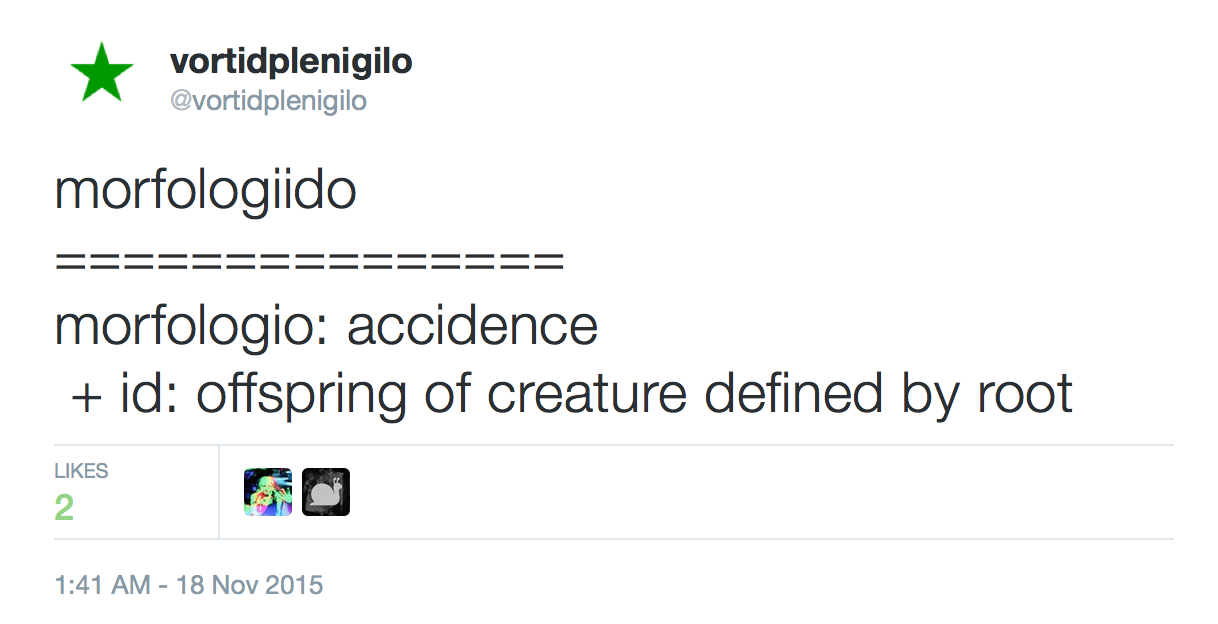 I would gladly welcome comments/ideas on the GitHub repository, be it language suggestions or corrections (since I am still a komencisto), code fixes, ideas for automatically producing 'interpretations' of the generated words, or anything else. The contents of affixes.py might also be useful for other people doing things with Esperanto.